Vienna (Austria) 15 November 2021 - People who are exploited by human traffickers continue to be detained and prosecuted for offences they are made to commit by their traffickers.

In a statement released today, the Inter-Agency Coordination Group Against Trafficking in Persons (ICAT) urges countries to strengthen measures to identify and protect victims and improve access to justice procedures to prevent revictimization and punishment.

ICAT, which is the UN’s leading policy forum to address human trafficking, is coordinated by the United Nations Office on Drugs and Crime (UNODC) and is comprised of 30 UN entities as well as other international and regional organizations.

“Victims of human trafficking not only suffer the worst forms of physical and psychological abuse but are also often prosecuted and even convicted for crimes they were compelled to perpetrate by their exploiters,” says UNODC Executive Director Ghada Waly.

“They need to be promptly recognized as victims of crime and provided with access to the necessary support and protection services. This assistance should not be conditional on their participation in criminal proceedings,” she adds.

The ICAT statement comes a week before States meet to appraise the United Nations Global Plan of Action to Combat Trafficking in Persons (GPA) and issue a Political Declaration to be adopted by the UN General Assembly.

UNHCR, the UN Refugee Agency, is the current Co-chair of the ICAT, together with UNODC, and has also been urging more support for trafficking prevention and response efforts.

“Refugees and other forcibly displaced and stateless people are among those most at risk of trafficking. Conflict, displacement, and a lack of safe pathways often force many to resort to dangerous journeys in search of safety, where their desperation and vulnerability are unscrupulously preyed upon by traffickers,” said UN High Commissioner for Refugees, Filippo Grandi.

Further calls to action include an increase in efforts to discourage the demand for goods and services that lead to human trafficking and the adoption of measures to regulate procurement processes that comply with international human rights and the highest labour standards.

The statement notes that globally, prosecutions and convictions in human trafficking cases  remain ‘strikingly low’ compared to the extent of the crime and highlights that limitations in anti-trafficking responses mean traffickers ‘continue to exploit victims and operate with impunity’.

“The misuse of the Internet and other technologies by traffickers has further increased their potential to recruit and exploit victims while largely avoiding detection by authorities,” says Ms. Waly.

She adds: “Therefore, there is an urgent need for criminal justice officers to enhance their digital expertise to better fight trafficking, in compliance with human and privacy rights, and in partnership with relevant private sector entities.”

The ICAT statement stresses that conflicts, natural disasters and crisis situations, like the ongoing COVID-19 pandemic, aggravate the underlying factors that make people on the move vulnerable to human trafficking and, at the same time, create new vulnerabilities.

With limited safe and regular pathways to migrate and seek protection, people who need to leave their countries will continue to resort to smugglers to cross borders, placing them at high risk of being trafficked, warns ICAT.

A further call to engage victims of human trafficking in the design and implementation of anti-trafficking prevention and protection programmes reinforces the message of this year’s World Day Against Trafficking in Persons that ‘Victims’ Voices Lead the Way’.

According to UNODC’s 2020 Global Report on Trafficking in Persons, which draws on data from 148 countries, trafficking in women and girls for the purpose of sexual exploitation continues to be the most detected form of the crime, while trafficking for forced labour, mostly of men and boys, is on the rise. Children make up one third of all detected victims.

Trafficking in persons for the purpose of organ removal: a poorly detected and underreported phenomenon of growing concern

Public procurement has a key role in preventing human trafficking 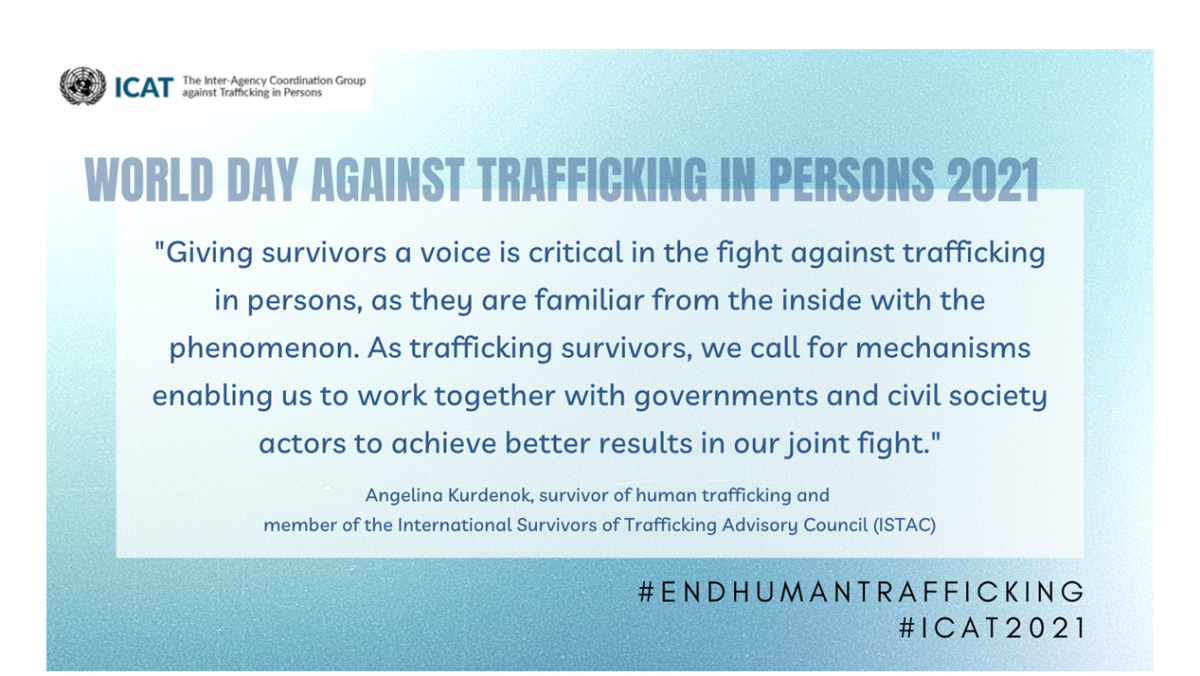 World Day against Trafficking in Persons 2021: ICAT calls for inclusion of voices and perspectives of victims and survivors in counter-trafficking interventions